My wife, Judy, likes to say that we’re all on ‘the spectrum’! What does that even mean? My colleague tells the following story of his growth in spiritual leadership:

A trusted prophetic person gave me a word: «God wants to give you a shepherd’s heart.»

I am wired for the task and wake up every day wanting to get the job done.

He describes how he had to learn that any leadership role necessarily included dealing with relational strains and conflicts. Not his favorite thing at all. He did grow in this area, but it will never be his strong suit. Nor should it.

Task-orientation or people-orientation? Everyone falls somewhere on that spectrum. People-oriented or ‘get the job done’-oriented. Think about it: this applies to any part of organized life: family, church, or business.

Apple visionary Steve Jobs was not known from his personal charm. But I’m so glad that he lived, created products like the MacBook Air I’m using as we speak. He was not easy to work closely with. But he led with innovation and created huge successes in business.

The pot can’t say to the potter, ‘I don’t like how you made me.’

But we do. Behind closed doors in our minds. All of us. Maturing happens when we understand and embrace the truth about how we are wired. And how others are.

And when we position ourselves in a fit with others resulting in growth. This means that we will seek more than personal comfort. There will be disagreements, tension, and challenges.

If you get married, you will find someone different than you. That can create a family. It’s not easy. But the goal is not just to feel good

In any organized group, success only happens when people are joined together. People with diverse talents.

In the world of team sports, who is the most important person? The star player or the head coach? Is defense or offense more important? Or the media that bring sports into the lives of millions? Without owners and management, you would never have stadiums built, tickets sold, or contracts signed.

Which role is more important: the chief executive of a company or middle management? The research and development team or marketing? Creatives or lawyers?

Then the answer is both/and. Life must be lived in teams, and each role is necessary. Especially yours! You and I will view the world through our particular value system. Your role is vital, and you should feel that your gifts are important. Because they are when seen in a larger context.

Leaders that grow organizations must deal with all of the various people and their strengths and weaknesses. Leaders must cast vision, initiate new things, and work with objectives, strategy, and tactics. But if they don’t create a culture that values people and relationships their success will be short-lived and turbulent.

So my questions to you are: Where are you on the spectrum? And how will you position yourself to join others and make some initiative successful? What do you bring to the table?

The Kingdom is promised to experience exponential growth. This means greater numbers, as well as greater depth. Quantity and quality. Breakthrough and sustainability. It’s never either/or.

I hope your week goes well, and you find a way to be a part of the expansion of God’s Kingdom wherever you find yourself ‘all-in’ this week! 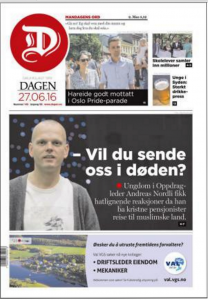 Have you ever been to a market place in the Middle East? I have. And I love it!

At such places there are people everywhere who want to sell stuff to you. Fancy a new watch or a new cell phone? Compared to prices in Europe, you pay crumbs for these items with “brands” like Nokia and Omega. Of course, most of it is faked. That’s part of the deal. You know what you get. Your new Omega watch may last for three months – if you’re lucky.

Being in the capital cities of Europe is like being at a market place. People are pushing stuff onto you. However, the big difference from a Market Place in Amman and the city of Oslo is what people want to sell you.

In the capital cities of Europe, ideas are for sale!

There are agendas, and they are all over us. Different people want to push their ideas – politics like environmental-friendly thinking, sustainable living, or same sex marriage. It may be the latest trendy clothing brands, or even more seriously, their worldview. You may not be aware of it, but you are a target for someone’s mission.

Remember the early ’90s when you were surprised to see men holding hands?

Where is change taking place? We can divide a society into seven spheres of influence: Politics, Religion, Communication and Media, Celebration and Culture, Family, Education and Business. All of these layers of society have their own ‘missionaries’ that intend to impact you to think, buy and act according to the worldview they advocate.

In the big picture, I believe change of society today really takes place within the sphere of Education and Celebration. New ideas are shaped at our universities, as well as by celebrities. They are doing new things in new ways (It’s a bit like how YWAM is supposed to be!). Remember Madonna kissing Britney Spears at the MTV Video Music Awards in 2003? I do. Back then it created major headlines around the western world. Today, I believe a similar incident would hardly the headlines at all. Why? Because the boundaries have been moved.  In this case, it was two female celebrities kissing on a public stage.

While new ideas and trends are shaped at the universities and among celebrities, media communicates these to the masses. Down the line our politicians make these new ideas and trends legitimate by voting for them in our parliaments. And the rest of us? We act according to what society deems normal, allowing the world views of the world to impact us, instead of us impacting them.

What am I saying?

The shaping of culture happens in the capital cities. This is the place were new ideas and trends pop up. Firstly, in the underground and at the fringes; next they will be in the mainstream. Revolution never happens in the corridors of power. Have you ever heard of a revolution starting at the top of a pyramid of power? I haven’t. Think of the French Revolution! Or the Russian Revolution! Or the abolition movement against slavery! It started in the fringes – in the capital cities.

What is our calling?

YWAM is called to disciple nations. Change happens in a man’s heart. When enough hearts are transformed, transformation of society happens. Like this, we can impact and influence ideas and eventually the world around us.

From a human perspective, it may look like we as the Church of Christ are losing: It is tempting to believe that we are not able to transform societies. However; in times of unbelief, have we lost our faith in God – what he can do and who he is? I believe God is the X-factor. Throughout the centuries God has invested so much in Europe and I believe He has not yet received a full payback from his investments yet. God wants transformation much more than we do. And he is to be trusted.

What can we do?

What happens in Oslo today happens in the rest of Norway tomorrow. I believe it is time for YWAM to focus on the capital cities. By being involved in our capital cities we can by God’s grace be a part of shaping the things to come. Like this, Europe can turn back to its roots of trusting God and his Word.

This is my motivation for why I am involved in mobilising and training young YWAM pioneers to establish fresh expressions of YWAM ministries in our capital cities. During the last years, we have established teams in Oslo, Copenhagen, Helsinki, Reykjavik and Tallinn.  These are five out of eight capital cities in our region. (YWAM operates in Riga and Stockholm already.)

Let’s pray for the only capital city without YWAM presence in Northern Europe:  Vilnius in Lithuania (http://www.ywamne.org/eyeon2014). Pray that young leaders will rise up to the challenge and take on this ‘giant’ as well. Let’s also pray for the pioneering teams in these five cities and for the existing teams in Riga and Stockholm.

This article was written for YWAM Europes prayer network.